Walt Bellamy, the Hall of Fame center who was among the leading NBA scorers and rebounders of his time but who was remembered as well for being traded away by the Knicks for Dave DeBusschere in a final step toward their first championship season, died on Saturday. He was 74.

His death was announced by the Atlanta Hawks, for whom he played in the early 1970s. They did not list a cause but said that Bellamy, who lived in the Atlanta area, had attended their season home opener on Friday night.

Bellamy was the National Basketball Association’s rookie of the year in 1962, playing for the expansion Chicago Packers, who selected him as the first choice in the draft after he played on a gold-medal-winning United States Olympic basketball team and was named an all-American at Indiana University.

Listed at 6 feet 11 inches and 225 pounds, Bellamy was agile playing inside, possessed an outstanding shooting touch and battled off the boards against some of the greatest centers.

He averaged 31.6 points and 19 rebounds a game as a rookie and was an All-Star for each of his first four N.B.A. seasons, but he was overshadowed in his 14-year N.B.A. career by Wilt Chamberlain, Bill Russell, Nate Thurmond and Kareem Abdul-Jabbar. Photo
Walt Bellamy as a Knick in 1966. Credit Larry C. Morris/The New York Times

Bellamy had nearly 21,000 points when he retired, and he was among the most durable players the league had ever seen. But he had to wait until 1993 to be elected to the Basketball Hall of Fame in Springfield, Mass. He had never played on an N.B.A. championship team, had been measured alongside the brilliant centers of the 1960s and ’70s and had a reputation for inconsistent play.

When he was finally selected for the Hall, Bellamy told The Atlanta Journal-Constitution that there had been times when his teams “were not as successful as we would’ve liked,” but he added, “I would say of Walt Bellamy that he played with mental tenacity as well as physical tenacity.”

The Knicks obtained Bellamy in a trade with the Baltimore Bullets, the successor franchise to the Chicago Packers (later named the Zephyrs), early in the 1965-66 season, hoping that they now had an outstanding center to go up against Chamberlain and Russell.

Bellamy gave the Knicks strong rebounding in a lineup featuring Willis Reed, Walt Frazier, Bill Bradley and Dick Barnett. But to make room for Bellamy, Reed was moved from center to forward, where he was less comfortable, leaving the Knicks still without a true power forward.

Midway through the 1968-69 season, the Knicks traded Bellamy and guard Howard Komives to the Detroit Pistons for DeBusschere, a rugged and unselfish forward with outstanding court savvy.

That deal set the stage for the Knicks’ championship teams in 1970 and, with the addition of Jerry Lucas and Earl Monroe, in 1973. By then, Bellamy, known as Bells, was playing for the Hawks, whose fans greeted him with cowbells but saw their talented teams fall short of a league title.

Walter Jones Bellamy was born on July 24, 1939, in New Bern, N.C. After two seasons at Indiana under the future Hall of Fame coach Branch McCracken, he was named to the 1960 Olympic team, an all-amateur squad that also included Oscar Robertson, Jerry West and Lucas.Photo
Bellamy scoring for the Knicks against Baltimore. He had nearly 21,000 points in a 14-year N.B.A. career, but was overshadowed by centers like Wilt Chamberlain and Bill Russell. CreditDon Hogan Charles/The New York Times


“This was the authentic dream team,” Bellamy once said, reflecting on the 1992 United States Olympic squad, which was loaded with pros and given that designation. “We were the best team that has ever played basketball.”

Bellamy went on to score 20,941 points, averaging 20.1 points a game, and had 14,241 rebounds, for 13.7 a game, playing for Chicago, Baltimore, the Knicks, the Pistons, the Hawks and, for one final game, with the New Orleans Jazz. After leaving basketball, Bellamy was active with the N.A.A.C.P., the Urban League and the Y.M.C.A. in the Atlanta area.

A list of Bellamy’s survivors was not immediately available.

Bellamy had a terrific start as an N.B.A. rookie, but then came a matchup against Chamberlain in November 1961 in Chicago.

As related by Gary M. Pomerantz in “Wilt, 1962,” an account of the season when Chamberlain scored 100 points for the Philadelphia Warriors in a game against the Knicks and averaged 50.4 points a game, Bellamy sought to avert any wrath Chamberlain had in mind to put a rookie in his place.

“Hello, Walter,” Chamberlain replied. “You won’t get a shot off in the first half.”

Chamberlain blocked nine shots that Bellamy attempted from inside the free-throw line. When the second half began, Chamberlain told Bellamy, “O.K., Walter, now you can play.”

Chamberlain finished with 51 points. Bellamy would have many high-scoring games, but on that night he settled for 14. 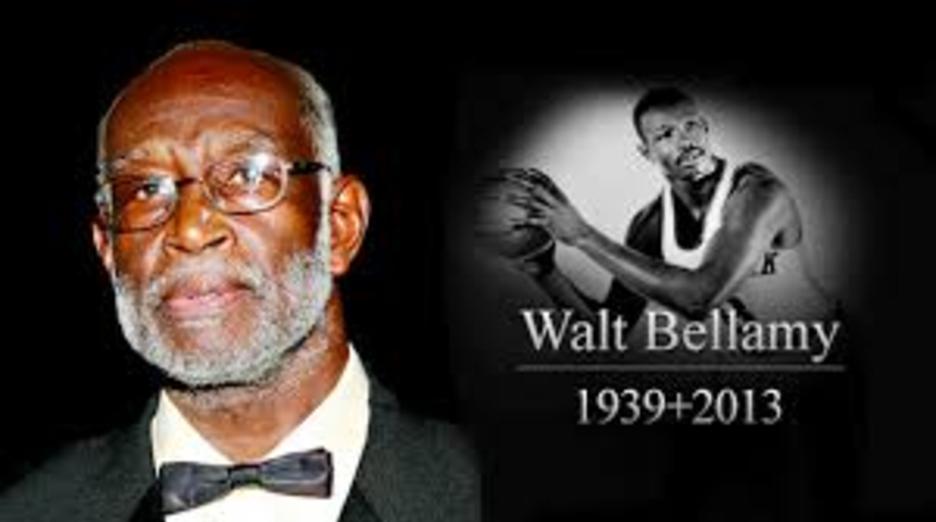